Days 23-24: A scary ride + the most beautiful snowflakes 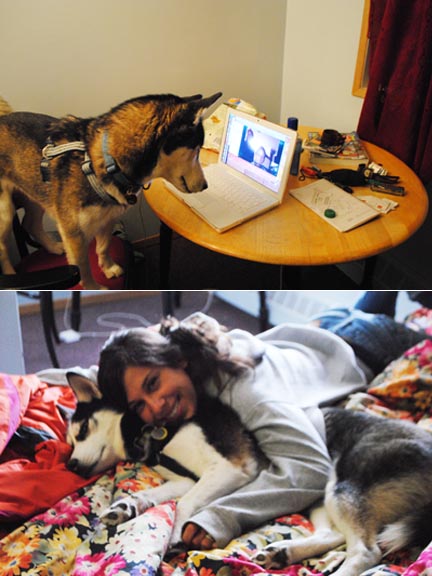 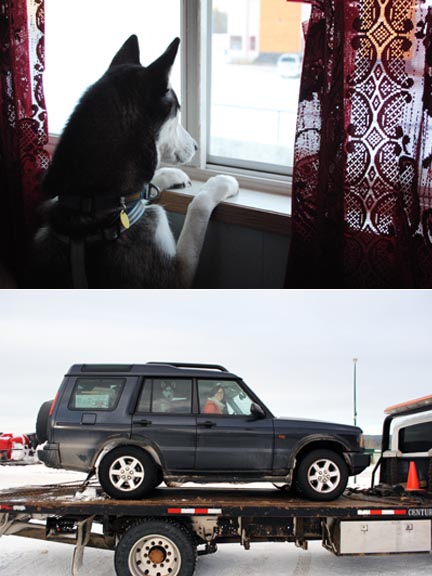 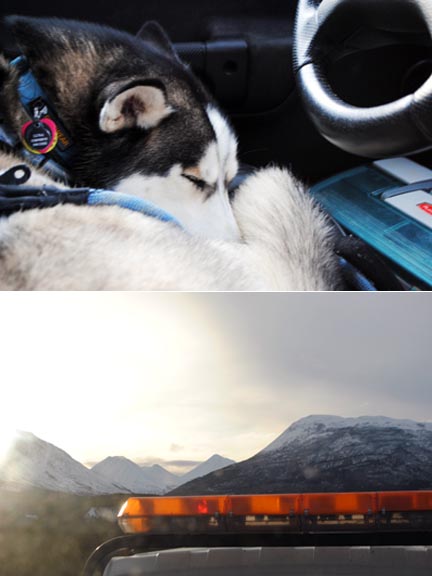 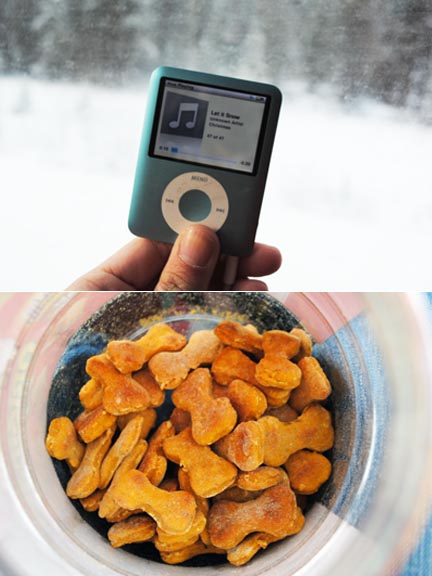 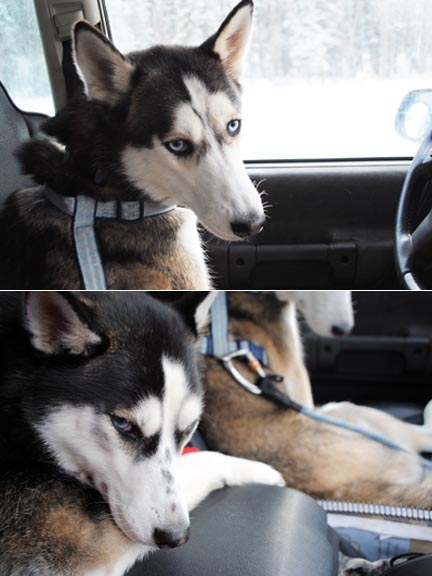 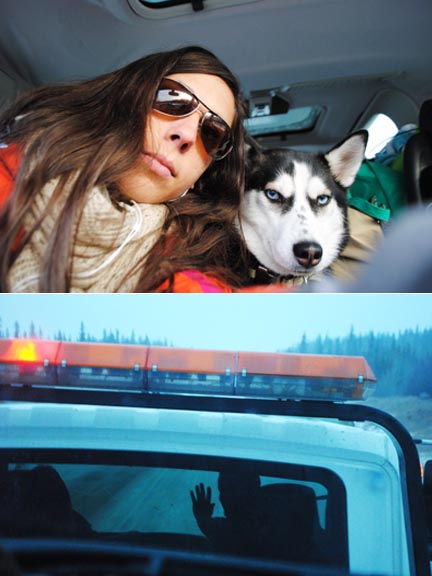 The tow truck was scheduled to arrive in Watson Lake at noon today. Well he was two hours late! And sort of crazy. The dogs weren't allowed to ride in his truck, so I rode in the Land Rover - yes, a freezing car strapped on top of the trailer - to be with the dogs and keep them calm (they suffer from a bit of separation anxiety). My theory was that if it wasn't safe for me to ride there, then it wasn't safe for my dogs either. I told the driver this exactly, and he mumbled something and shrugged (???). So THAT was a crazy, crazy experience. Sam rode in the truck and probably turned around to check on us three girls every few minutes, especially if there was a bump in the road. I felt loved. :) I'll admit that it was a pretty terrifying ride... it was so, so cold but I tried to stay distracted with Christmas music on my iPod. Sam told me later that his experience included incoherent ramblings from the driver, texting while driving, and willingly telling Sam that his truck was broken. Can't make this stuff up.

Even with AAA's free 200 miles of towing, it still cost us several hundred dollars to be towed from Watson Lake to Whitehorse. The tow truck dropped us off at Bernie's gas station to rent a uhaul. The gas station clerk, John, was so nice and helpful. He insisted that the dogs and I wait inside to warm up and offered me free hot chocolate. We were able to get a uhaul truck rental squared away, but sadly they did not have a trailer available for the Rover so we'll have to leave it here tonight and come back in the morning. We stayed at the Yukon Inn, and it was so nice to be together in a warm hotel room after a long day (we got in after 9pm). We had been out of touch with all of the election hullabaloo since we weren't even in the United States for the past week, but we turned on the TV to learn that President Obama had been re-elected. 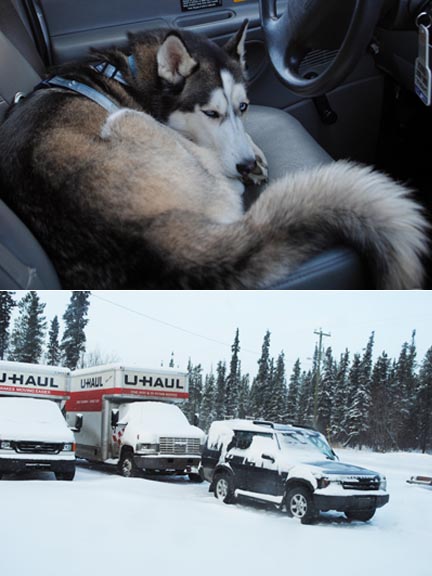 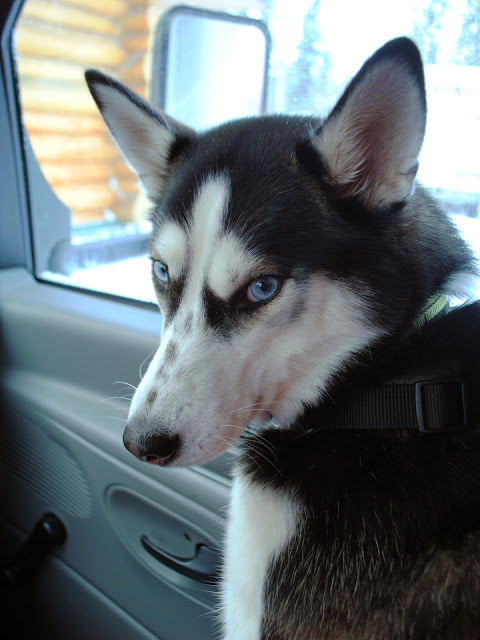 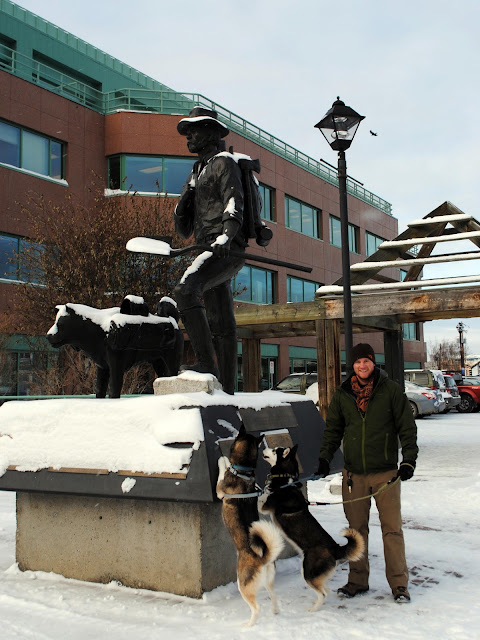 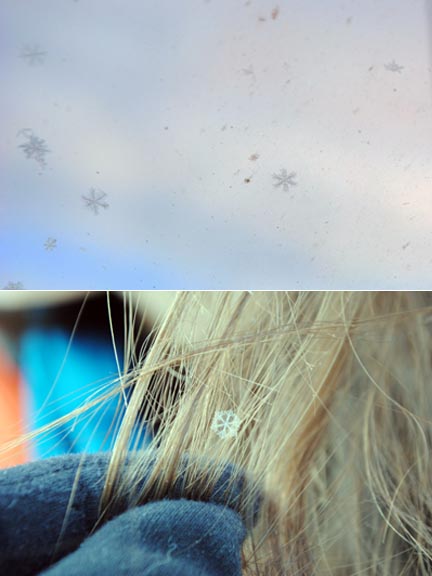 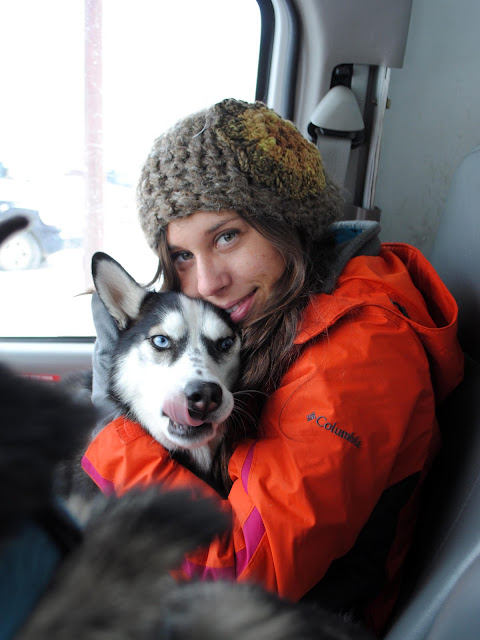 After running around town trying to find a uhaul trailer, we ended up having to wait until after 1pm while it was being repaired at a tire shop (I know)... which meant that we had to delay our journey another day (Canadian towns are so spread out that we wouldn't have made it to our next stop before dark, and dark=unsafe).

To make the most of our time here, we took the dogs into downtown Whitehorse (the capitol of the Yukon Territory and also where the Yukon Quest dog sled race begins in 2013!). We bought some local art prints from the Midnight Sun Emporium. We pretty much skipped lunch on this entire trip to save money and time... but dinner tonight was from Domino's!

The snowflakes here... wow, so beautiful. I've never seen anything like it before. I was amazed at how beautiful and intricate the details were in even the smallest of snowflakes, how God has created such beauty in this world for our enjoyment.

So... we picked up the trailer and went back to Bernie's for the Rover (kind of hoping it would be stolen to take it off our hands but no such luck;). Again, John was so helpful! We couldn't have done any of this without the help and genuine kindness from strangers.
at 4:17 AM